An entire country and its culture cannot be understood in a week, but we have certainly noticed some similarities and differences.

Living in the American Southeast, folks are generally friendlier than anywhere else in the country. Travelling extensively throughout Canada, I can say our neighbors to the north are particularly friendly. However I’m not sure I’ve been anywhere with such friendly and accommodating people than Oz. It started in the Sydney airport where strangers practically adopted us and made sure we got to our flight intact. Everyone has been extremely polite and friendly.

From the time we walked outside the Brisbane airport I’ve felt like I stepped into an alternate universe. At first most things looked the same but with a closer look, small differences became apparent.

We own a Toyota Highlander so we decided to rent one for the first month, except they call it a Kluger, and they put the steering wheel on the wrong side. The license plate said ‘Queensland – Sunshine State’; I thought Florida was the sunshine state? Luckily it was late and the roads where largely empty when we made our way from the airport to our hotel. I can’t tell you how many times I turned on the windshield wipers instead of the turn signal. Without a GPS or a good map, it was a small miracle we made it.

We purposely reserved a hotel within walking distance of a shopping center so we could gear up before adventuring out.

Aussie Target looks like a Target, but it’s not. It’s more like Kmart. Kmart looks like Kmart, but it’s not. It’s more like Target. Big W is good too, but it’s not Walmart. Walmart does not exist here, they’re probably better off. Big W is actually a spin-off of Woolworths, but not the original American five and dime F. W. Woolworths. Aussie Woolworths is a grocery store chain. Foot Locker, which is the old American Woolworths, is here too. They don’t have Kohl’s, but they do have Cole’s. It’s a major grocery store chain. They do have TJ Maxx, but they’re called TK Maxx. To my excitement Blockbusters still exist here. I haven’t seen one of those in years. Now I just need a DVD player. 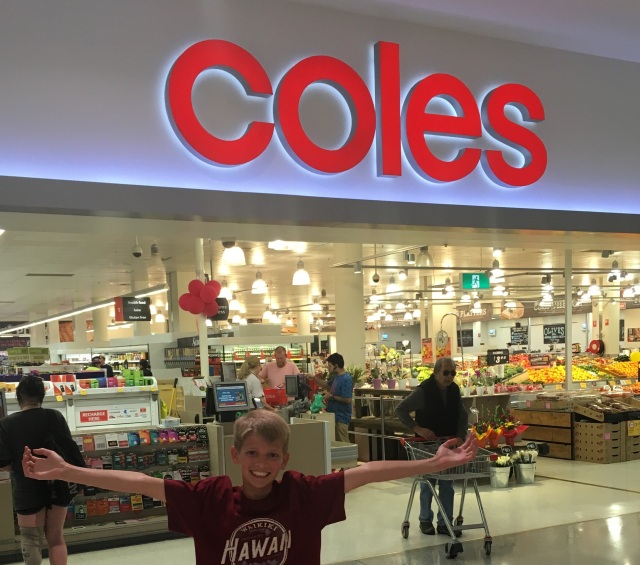 Grocery shopping has been fun. It looked a lot like it did in the U.K. Staples such as mac & cheese and pretzels could only be found in the international food aisle and they are expensive. Certain items are priced similar as in the United States but most are far more expensive. This Pittsburgh boy was glad to see plenty of Heinz products on the shelves. Yellow mustard is “American mustard” and we cannot find brown mustard. If you ask for it in a restaurant, prepare yourself for honey mustard.

Fast food chains are familiar. McDonalds, Subway, KFC, Hungry Jacks (Burger King), Dominos, and Pizza Hut are common. Mexican food is available although we haven’t been impressed yet. Asian food appears to be plentiful however we haven’t tried it.

Many things are the same but the differences have been fun so far.

This entry was posted in Australia and tagged American Family Travels. Bookmark the permalink.