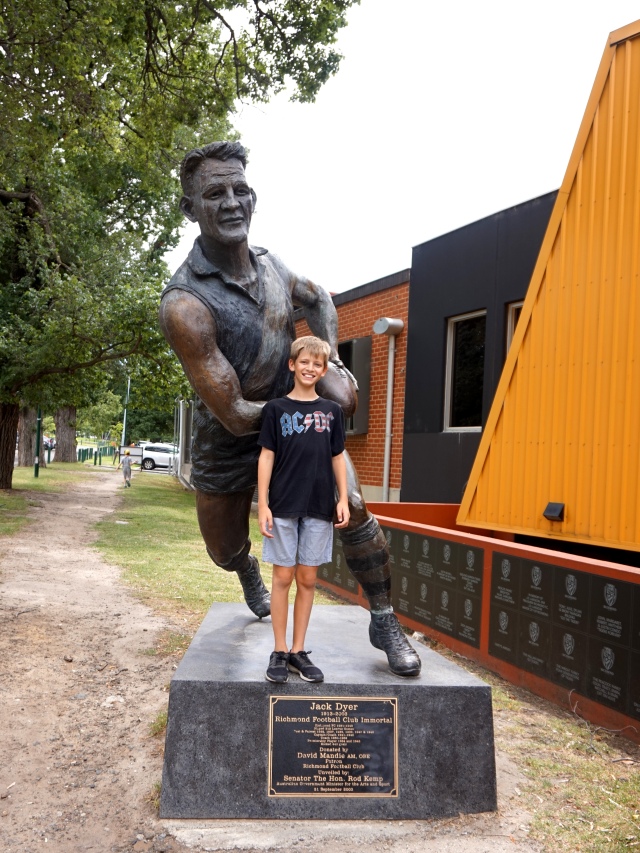 The most famous stadium in all of Australia is the Melbourne Cricket Grounds, otherwise known as the MCG. The MCG is next to the stadiums of Melbourne Park but technically it is in adjacent Yarra Park. Established in 1853, the stadium hosted Australia’s first Olympics in 1956 Summer Olympics. The current stadium boasts being 10th* largest in the world and the largest in the Southern Hemisphere. While the MCG is mainly used for cricket and Australian Football League (AFL), it has also hosted a variety of events such as rugby union, rugby league, and soccer matches. This hallowed ground is a source of pride for many Melburnians and Australians country-wide.

We got an extra treat when we visited the stadium. AFL stars Dustin Martin and Patrick Dangerfield were shooting a television commercial. Prior to arriving in Australia we would have had no idea who they were, but we have tried to fully emerse ourselves including sport. We recently watched Dustin Martin’s Richmond Tigers win the AFL Premiership along with the game’s MVP honors (Norm Smith Medal) and the season’s player of the year honors (Brownlow Medal). Patrick Dangerfield plays for the Geelong Cats and was last year’s Brownlow Medal recipient. We were excited to see them but I’m sure a lifelong AFL supporter would have been truly thrilled.

Etihad Stadium (aka Docklands Stadium) is the only major sporting arena not located near Melbourne Park. It is located in the Docklands area, west of the CBD. The stadium is mainly used for AFL however we will be seeing the Foo Fighters here at the end of our visit.

*The top 10 largest capacity sporting arenas in the world are: