Craters of the Moon

Craters of the Moon National Monument is located in central Idaho. We stopped on our way from Ketchum to Twin Falls. Craters is a unique landscape of lava rock fields named for their similarity to the moon’s craters. Astronauts used the site to train for the lunar landing missions but later found the real moon’s surface to be much different. The craziest thing we saw was ice in a lava tube when it was 102 deg F (39 deg C) outside! 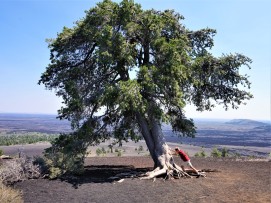 Craters of the Moon

This entry was posted in Idaho and tagged Craters of the Moon, Ketchum, Travel, Twin Falls. Bookmark the permalink.