Father’s Day was a travel day for us with a single goal, get from our hotel in Dublin to our hotel in Manchester without any problems – mission accomplished. Once we arrived at our hotel in the Manchester suburb of Stockport, we walked downtown to get something to eat and shop. The only problem we had is most everything closed early on a Sunday so we didn’t get any of our shopping done. We did have a very nice dinner at a chain restaurant called Frankie and Benny’s NY Italian Restaurant. It didn’t get great reviews but it was the only thing open and we were happily surprised. The service was horrible, as it has been in every restaurant we’ve been to yet, but otherwise the food was good. We liked it so much that we ate there again the next night after a successful bid at shopping. They sat us in the exact same booth so it was like déjà vu.

Monday morning we started our day with a drive to Liverpool. My research provided very little to get excited about but I thought we ought to at least give it a go to say we saw it. Liverpool was a much nicer city that I was expecting. I was struck by how much American companies had influenced the shops. American restaurants, either chains we know or local restaurants serving American food, stores and products were everywhere; more so than in Ireland. We had Krispy Kreme donuts for goodness sake.

We enjoyed walking downtown, especially around the waterfront area of Albert Dock. We stumbled across the Beatles Museum and the Yellow Submarine but did not visit. Fresh fruit from one of the street vendors was a welcome change to our diet of everything-comes-with-fries and a soccer ball from the Liverpool FC Shop became a cherished keepsake for the kids. All-in-all our visit was brief but exceeded expectations, a nice city to spend some time. Had I known, we would have scheduled more time here.

Next on the tour was the city of Manchester and the first stop was the hallowed ground of Manchester United’s stadium. Elle wore her Burnley shirt in defiance. We did not take away anything from the gift shop since neither of the kids are big fans and quite a bit of their stuff is available in the States.

The next stop was center city Manchester. We walked about the area around the City Hall. Manchester was nice enough but there was nothing to get too excited. Still I must say it seemed nicer than I was expecting based on what I had read. Like Liverpool, it is difficult to fairly judge a city with such a brief visit.

We ended our day back in Stockport getting dinner and finally doing some much needed shopping before we head north into Scotland tomorrow morning. 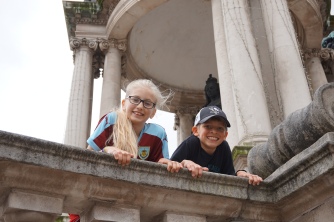