Tokyo, the capital city of Japan, is the largest metropolitan area in the world with almost 38 million people, however spending a week navigating public transportation we’d never have guessed it. We arrived prepared for the noise and congestion of New York or London but instead found quite a different place. By comparison Tokyo was quiet, clean, safe and green.

The trains and subways handle a massive amount of people but they are orderly, clean and efficient. We rarely had to wait more than 5 minutes. At first finding our way through the system was challenging but once we figured it out, moving around the city was easy.

The Japanese are extremely polite and friendly. Staring dumbfounded at the largest train map we’d ever seen, a stranger came up to us who knew little English. Not only did he want to help, he quickly decided to take us to our destination. I do not mean he offered to walk us to the train terminal, he planned to take two trains in the exact opposite direction he was travelling to make sure we got to our destination unscathed. I couldn’t even imagine someone wanting to help that much.

Given we only speak one language, we had some concerns about communicating. At times it was difficult but for the most part Tokyo is multilingual. Much of the signage included English, Chinese and Korean translations. Most young people we met spoke varying degrees of English and restaurants often had pictures of each menu item that you could point when ordering. For eveything else there was alot of hand gestures, smiling and nodding to get through basic interactions. They might have been thinking ‘you stupid Americans’ but they never made us feel that way.

We spent six days exploring the city and only scratched the surface. More pictures to follow. 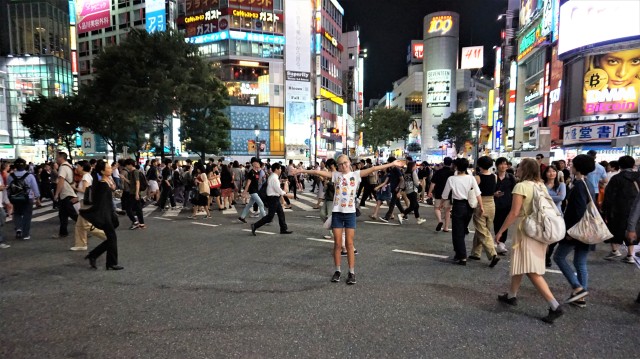 Shibuya Crossing, allegedly the busiest intersection in the world