Kanagaroo Island is a well known holiday spot in Australia. If you Google ‘top tourist sights in Australia’, you will find it on many top lists. Kangaroo Island is on the southern tip of South Australia, about a 90 minute drive south of Adelaide and a 45 minute ferry ride from Cape Jervis. We stayed in Penneshaw where the ferry docks since we were arriving late on the first night and leaving early a few days later. Penneshaw is a town of less than 300 residents but it has all the basics, a grocery store, a few restaurants, petrol station and post office. We had two full days to see as much of the island as we could.

On our first day we drove to the west side of the island to Flinders Chase National Park and worked our way back east. Some of the island’s most popular attractions are on the southwestern corner including Cape du Couedic Lighthouse, Admirals Arch, Weirs Bay, and Remarkable Rocks. Beside the rock formation itself, Admiral Arch is a great place to see fur seals sunbathing on the rocks. Following the southern route we stopped at Vivonne Bay Jetty and Point Ellen before returning to Penneshaw for the evening sunset. 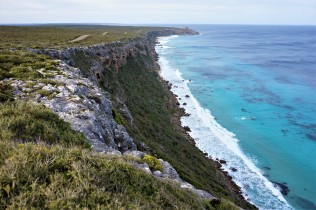