The Queue: When I started planning this trip, it was a surprise to me that I could not buy tickets in the normal fashion. There are only four ways to get tickets to Wimbledon: the ballot, Ticketmaster, hospitality packages, and the Queue. We had missed our opportunity at the ballot and it sounded like the chances were slim for people outside the U.K. Hospitality packages are not for your average Joe. I had no idea what the Queue was but I knew Ticketmaster and it seemed at first this was the obvious way to get them, until I dug a little deeper. We did try but to no avail. I won’t bore you with all the details now, maybe later when I get back for those planning to go one day.

With no tickets and the Championships starting the next morning, we were headed for the Queue. To their credit, the folks who run the event want to make sure tickets are available at a reasonable rate and prevent reselling. The system they devised is well-organized, but wow does it take time. You really need to want tickets to get them. Again I’ll try to add some more detailed information later but basically you need to wait in line or “queue”. The Queue become a mass of humanity in line after line in a field outside the grounds.

The Queue is an event unto itself. I had never heard of it before this trip but now it gives us a very different perspective on the true Wimbledon experience.

The Championship: We finally entered the gates of the All English Lawn Tennis and Croquet Club (AELTC). For the kids, it was wide-eyed excitement. For Cara, it was a life-long dream. For me, it was a huge sense of relief that we made it and I didn’t screw this up for my wife.

The facilities are steeped in tradition. They are also much smaller and intimate than I was expecting. The AELTC provides a very different experience than the U.S. Open. The main courts are small stadiums as you would expect but many of the others are in cramped quarters with only a row or two of seating on both sides and masses of people walking by as they played. We hopped from court to court to watch portions of many different matches and of course ate and did a little souvenir shopping as well.

Cara had led us to another tradition. We sat on “The Hill” to watch the big screen in the evening to see the premier match-ups that we could not get a seat. There we had our strawberries and cream amongst a diverse group of tennis fans speaking a variety of languages and wearing anything from proper suits and dresses to shorts with the backsides made to look like tennis balls.

The last matches ended before 9. We stayed to the very end to soak up every bit of the experience we could. Cara is already planning another trip back with her sister. I on the other hand might never be back, but it will forever change my perspective on this annual event I have been watching since I was a child. 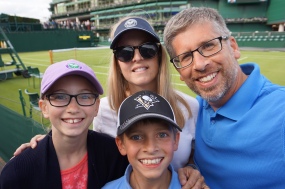